By the Hands of Men Books 1 and 2 by Roy M. Griffis 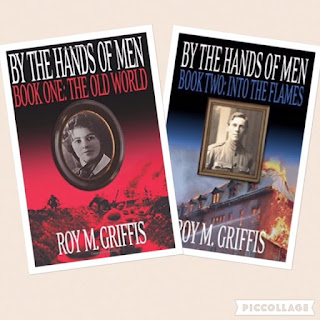 By the Hands of Men
Book One: The Old World

“With elements reminiscent of Hemmingway’s “A Farewell to Arms,” in the midst of World War I, a relationship develops between an English lieutenant and a young Russian nurse – a surprising tenderness against the backdrop of war…with likeable characters, spending more time in the “Old War” is an appealing prospect.” – Kirkus Reviews
“A truly remarkable historical novel – so finely rendered in period detail – that the reader becomes one with the plot and characters.  Mr. Griffis has a superb talent for capturing the small details that make up the whole – from the horrors of war to the very intricate procedures involved with early 20th Century Wartime medicine.  Charlotte Braninov is a very complex character, one who is beautifully drawn by the pen of Mr. Griffis.  Her conflicting feelings on war and her intense emotions sparked by her time treating Lieutenant Robert Fitzgerald left me breathless – they were so emotionally powerful.  This is a novel that will not only entertain and inform, but pull at your emotions as well – a truly beautiful novel set during a horrific time in history.”
AN OFFICIAL JAMES MASON COMMUNITY BOOK CLUB MUST READ
RICK FRIEDMAN, FOUNDER, THE JAMES MASON COMMUNITY BOOK CLUB

With the Great War raging around them, wounded Lt. Robert Fitzgerald falls in love with Russian nurse Charlotte Braninov.  Torn apart by illness and betrayal, they pursue separate quests that take them across a world on the verge of change.  From Shanghai to revolutionary Russia, they learn that hands of men can create a hell on earth – or, through the redemptive power of love, a heaven in which to truly live.

By the Hands of Men
Book Two: Into the Flames

Charlotte Braninov, traumatized by loss and her service as a frontline nurse, returns to war-torn Russia to find her family.  Captured by the Red Army, she exchanges one hell for another.  Her still-loyal Lieutenant, Robert Fitzgerald, believing the woman he loves is dead, struggles to recover from the ravages of combat and typhus.  In a desperate bid to rediscover himself, he commits to serve his country as a pawn in distant Shanghai.  Forging their destinies in a world reeling after The Great War, Charlotte and Robert will learn anew the horror and the beauty the hands of men can create when they descend into the flames.

Wow…
That is the best word I can find to describe these books.  Wow!  So Good!

Roy Griffis contacted me and asked if I would like to read and review the first two books in his By the Hands of Men series and, of course, I said yes.  I was honored and, to be completely honest, a little nervous.  I haven’t read many historical novels and I have never read any about war.  I wasn’t sure if I would like them and I really, really hate writing negative reviews!  Mr. Griffis sent me the novels and I was so excited when I checked the mail and they were there!  I love getting new books and was thrilled to see that he signed them for me too!  I was ready to dive in!  I was already in the middle of another book so I made sure I set enough time in my day to get through it so I could jump into my new, beautiful books.

I’m not sure why, but I felt intimidated when I first started reading book one, The Old World.  War…it made me nervous.  Please like it, please like it!  Well, as I read I quickly realized that I was nervous for no reason at all!  It was so good!  I couldn’t put it down!  Before I knew it, I looked at the clock and it was after 1 o’clock in the morning!  I had to make myself put it down so that I wouldn’t be a zombie at work the next morning.  As soon as I got home from work I picked it back up and devoured the rest of the book.

Right after I finished the first book, I picked up book two, Into the Flames.  Once again, I was sucked right back into this beautifully written novel.  Oh my word!  It was possibly even better than the first book!  I didn’t want it to end!  So Good!

I highly recommend reading both of these wonderfully written books and I can’t wait to read the third as soon as it becomes available!  Thank you so much, Roy Griffis, for sending these beautiful books to me!  These are definitely books that I will read over and over!

*Note: I received copies of these books from the author in exchange for an honest review.
Posted by Carrie K at 10:47 AM

Enter your email address to get the latest reviews!

Carrie K's Book Reviews accepts review requests in all genres except erotica. I accept review copies from large publishers, eBook publishers, and from requesting authors. I am also more than willing and happy to accept requests from independent publishers. I do prefer physical copies but will accept some digital formats. Please send an email to CarrieK913@icloud.com to submit your review request.

You can also send physical copies to:

I am super honest in my reviews, so please don’t send me hate mail if I don't give your book a glowing review. I'm giving my opinion on the book and not the author personally.

*Note: I am going to have to be extremely selective with accepting books for a little while. I have been getting so many requests that I'm getting a little overwhelmed with books to read, especially ebooks! While that's a great thing, it is also making my TBR list overwhelmingly long. Thank you for understanding!

Also, if I read a book and really do not like it, or if I DNF a book (which I rarely do) I will probably not post a review. Once again, thank you for understanding!